Reminiscences of a Childhood Mining in Kenya's Wilderness

This is a short reminisce of our chief gemologist Antony Zagoritis about his childhood in the wilds of Africa. I have been asking him to put pen to paper for a while and he finally has. A very interesting read.

I have been encouraged to write down some random memories of what is was like to spend so much of my early years chasing gemstones far from civilization in the African bush.
Growing up in 1970’s Kenya was a dream come true for a boy. Especially one lucky enough to have a father who was a gemstone prospector and miner. Life was certainly never dull for myself and my little sister Sabrina. During the school holidays we would make the long trek to the mine, a 7 hour drive down roads that more resembled a dry river bed than a vehicle carriageway.

Miles and miles of wilderness constituted our playground. I learned at an early age to hunt with a bow and arrow made for me by the Ameru tribe whom we lived amongst. Knee-high to a grasshopper, I was only capable of tracking down the smallest of prey and to be honest, never was very successful at that. I spent days at a time tracking with boys of the Ameru tribe, frequently disappearing for long periods of time much to the distress of my mother who despaired of my antics.

Myself at age 7 and my little sister considering a swim in one of the rivers near the camp.
This river was full of catfish so the crocodiles were well fed and weren't bothered about us.
The area we were camped in was populated by a number of rivers and watercourses in which my sister and I swam regularly. In hindsight, this was probably not a good idea, as the rivers were home to numerous huge crocodiles and some very aggressive hippos. We both emerged unscathed which is probably more due to pure luck than design.
Our camp consisted of a few canvas tents nestled in a clearing of thick thorn brush. The largest tent was the mess tent which housed a small dining table and some chairs. This is where evenings were spent with the campfire burning outside, more to deter any passing inquisitive lions than for warmth - cold was never a problem in this part of equatorial Africa.

Light was provided by paraffin lanterns and many of my happiest early memories are of us being huddled up in the mess tent in the flickering light, dad poring over geological maps trying to ascertain where he was going to start a new mining tunnel and examining the day’s mine production on a trestle table. 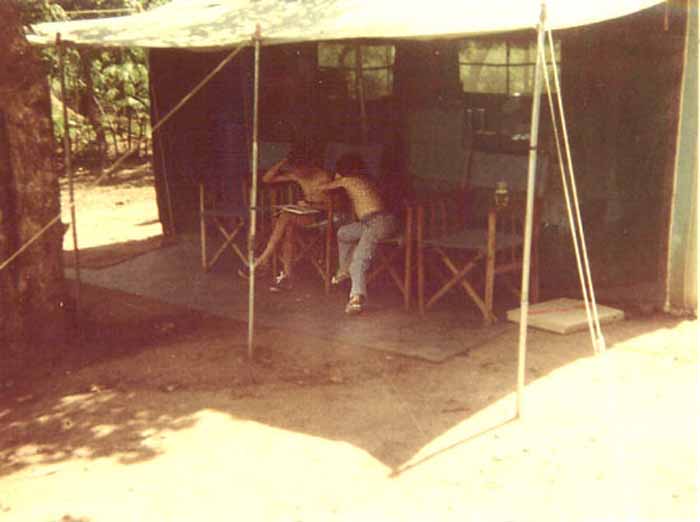 Schoolwork on the mess tent verandah. Whilst schoolwork was not at the forefront of our minds as there was too much exploring to do, it was a daily chore
Snakes were a constant hazard and checking under the beds before climbing in at night was a skill learned at an early age. One evening a 10 foot Cobra took a trip through the middle of our camp just as the campfire was being lit causing consternation on a huge scale. These snakes are deadly and very aggressive. Dad was forced to shoot it with his revolver.

Another evening I was having a wash in the shower tent which consisted of a bucket of warm water and a sponge. A green snake was curled up around the bucket and reared up as I leaned down to splash some water onto myself. I kept perfectly still as I had been told to do in such an event and eventually the snake calmed down and slithered out of the drainage trench. I was to learn that this was a Boomslang, an extremely venomous snake much feared in the area. 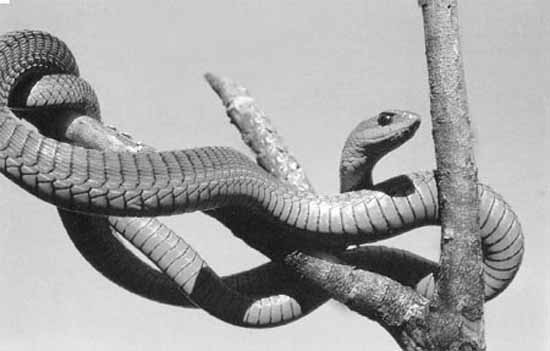 Boomslang in a tree. One of Africa's deadliest snakes.
Leopards were common in the area where we were camped and we often had sightings of the majestic animals, usually just before sundown. One particularly large one lived in some rocks high on a hill behind our camp. We nicknamed her “Penny” after the famous leopard raised by Joy Adamson of “Born Free” fame.

At night, her distinctive “coughing” would envelop our camp in the early hours. Leopards are the sworn enemy of Baboons and her presence kept them away from our camp which was a welcome service as Baboons can strip a camp bare of food in a matter of minutes. We therefore much appreciated her presence. Indeed, when she did eventually move on to another territory, we were inundated by Baboons and it was a huge task to repel them from our food stores. 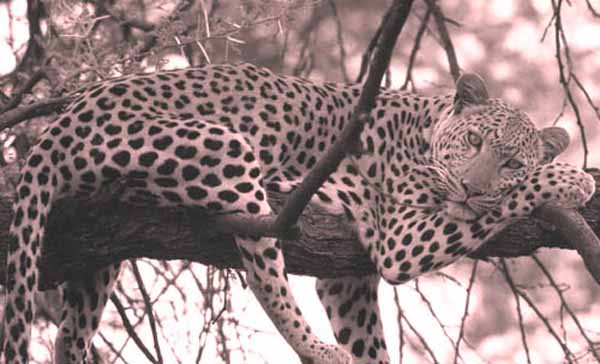 Penny near the camp, evening. Penny enjoyed many vantage points around the camp,
one being this large acacia tree.
Schoolwork definitely took a back seat during these halcyon days and I wasn’t really conversant with hard work in this area until I was sent to boarding school in England at the age of 13. My world drastically changed from one of warmth and excitement to cold, dark days and an abundance of snow, rain and sub zero temperatures.
Antony Zagoritis is a Director of RGC and the son of the founder.