Humans have been enhancing and treating gemstones for centuries. This article explores the two of the most common methods used – Coating and Chemical Treatments. This article series seeks to explore the various treatments used in the industry today in ord

Anyone who has an interest in gemstones and a passing knowledge of the trade will know that there exist many forms of treatment and enhancement devised by man to improve the appearance of lower grade gemstones. Sometimes, these treatments can transform a gemstone completely. Some treatments are permanent, others are not. Some are accepted as normal practice in the trade and are a routine part of a gem type’s route to market and others are unscrupulous attempts to misrepresent lower grade gemstones as fine pieces. This article will take a look at two of the most common forms of treatment, Coating and chemical treatments.

Coating
Painting and coating is an age old method of enhancing a gemstone, used as far back as Greek and Roman times, when they were considered an accepted method of further beautifying a natural gem. Today though, most painting and coating is usually done to deceive. It is most common with diamonds but can work effectively with almost any gem. The “painter” only needs to dab a little paint on strategic areas of a faceted gem and the facets “bounce” the color around throughout the stone. Hence, it can be placed cleverly on the girdle for example which will be hidden under the setting. 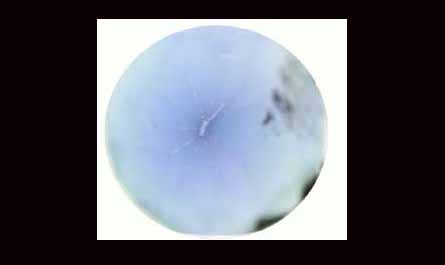 Tanzanite coated with Cobalt seen in an immersion cell. The coating has eroded off at the facet junctions at the culet (the center)

Many gemstones have been routinely coated to improve or radically change their color for many years now. Topaz is a case in point. “Mystic” topaz, for example has a thin layer of titanium applied to the pavilion which causes interference effects and results in a display of rainbow colors. Quartz and Cubic Zirconia are other stones often treated in this way.
Coating has become more sophisticated, and recently a new coating technique was discovered for Tanzanite where a thin layer of cobalt is added to lower grade color material. It has the effect of improving the color.
The treatment involves applying a coating consisting of cobalt, to pale Tanzanites in order to give them the appearance of fine stones. The treatment is identifiable using an immersion cell and microscope which reveals areas where the coating hasn't taken completely or erosion has occurred near facet junctions. The treatment was discovered by a New York dealer who sent the stone on for analysis. According to a joint AGTA-AGL press release announcing the discovery of cobalt-blued zoisite, the dealer was tipped off to possible coating when he had to repolish a stone and noticed an area of color reduction. When this stone was studied under a microscope and in immersion tell-tale signs of coating such as abrasion along facet junctions and culets were revealed. This was further substantiated by X-ray fluorescence. This treatment has been used to improve Topaz for many years but has only recently been identified with Tanzanite. The practice is very easy to identify and is not prevalent in the market.
Chemical Treatments
Chemical treatments all involve some type of chemical agent. These have also been around a long time and are still common. Emeralds for example have been oiled for over 2000 years to improve their color. This is the largest group of treatments and are used for a variety of reasons including to remove, add or change color, mask inclusions or improve durability. The chemicals involved can range from simple household items t such as chlorine bleach to sophisticated industrial chemicals. There are five basic types of chemical treatment, namely, bleaching, dyeing, diffusion, oiling and impregnation.
Bleaching is the most straightforward and is basically the use of a chemical agent to lighten or remove color or possibly dark inclusions. A good example is cultured pearls where virtually 100% of production is bleached to remove dark spots and make color even. Dark inclusions in Diamonds are also often bleached after laser drilling to provide access to the inclusion.
Dyeing is the opposite of bleaching and clearly involves adding a chemical agent to a material to deepen its color. Obviously dyeing a gemstone is a different proposition to dyeing clothing as the latter is porous and can therefore accept the dye whereas a gemstone is not. Hence, the gem has to have fissures created in it first in order to allow it to accept the dye. This process sis called “quench crackling”. Commonly dyed gems include lapis lazuli, opal, pearl, quartz and serpentine. Some of these gem types are naturally porous anyway and therefore don’t need to be quench crackled.
Diffusion Treatments are more sophisticated and use a combination of chemicals and high temperature to enhance color. It is a relatively new treatment that keeps being developed. The Thai dealers are particularly adept at the process. It involves heating the gemstone up to almost melting point. So in gems like Ruby and Sapphire (Corundum) this is upwards of 1500 degrees centigrade. Once the material hits these high temperatures, the molecular structure of the material “loosens” allowing the chemical to enter the stone. The chemicals penetrate the surface and near surface area of the material and become part of the crystal structure. Diffusion is a slow process and only really affects a shallow layer. 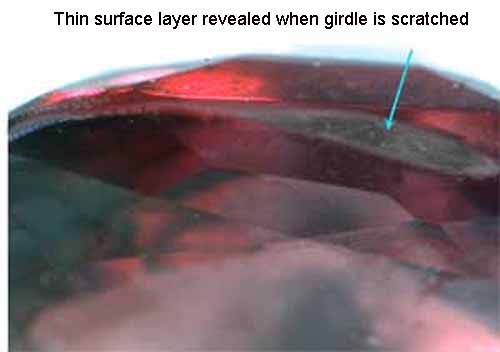 Diffusion Treated Ruby. Diffusion treatment only penetrates a shallow layer as illustrated.
Generally, the chemicals used are commonly natural components of the material itself. Sapphires as an example, are mostly heated together with alumina, titanium and iron which enhances its blue color. These occur naturally in blue sapphires.
Oiling is by far the simplest treatment. It involves filling fractures, feathers and cracks reaching the surface layer of the stone with a liquid. In the case of Emerald, this is routinely cedar oil but can include palm oil and even olive oil. The oil remains liquid inside the stone and can be removed if the stone is too rigorously cleaned – such as in a jeweler’s ultrasonic cleaner.
Impregnation, by contrast, involves filling fractures with solid substances such as wax or plastic or lead glass. They are applied in liquid form (melted) and then allowed to solidify. Sometimes stones are partially heated to help the process along, other times the stone can be put into a vacuum to remove air out of the fissures and allow a more complete filling.

So Why Treat?
After reading about the various treatments, the natural question is why do this at all? Obviously a large proportion of treating is done with the intent of cheating the buyer. However, this is not the only reason and many lasting treatments make gems more beautiful and durable. They also make more gems more available to more people at more affordable pricepoints. The bottom line is this – disclosure. Customers should always be made aware of what they are buying and be able to buy them at a suitable price point. Unfortunately this is not always the case in today’s market.