Humans have been enhancing and treating gemstones for centuries. This article explores the two of the most common methods used – Heating and Irradiation.

Anyone who has an interest in gemstones and a passing knowledge of the trade will know that there exist many forms of treatment and enhancement devised by man to make lower grade gems look better. Sometimes, these treatments can transform a gemstone completely.

Some treatments are permanent, others are not. Some are accepted as normal practice in the trade and are a routine part of a gem type’s route to market and others are unscrupulous attempts to misrepresent lower grade gemstones as fine pieces. This article will take a look at two of the most common forms of treatment, heating and irradiation.

This is a treatment that has been used for centuries. It is one of the oldest and most common treatments. History tells us that people in India were heating dull yellow chalcedony to produce bright orange carnelian as early as 2000BC. 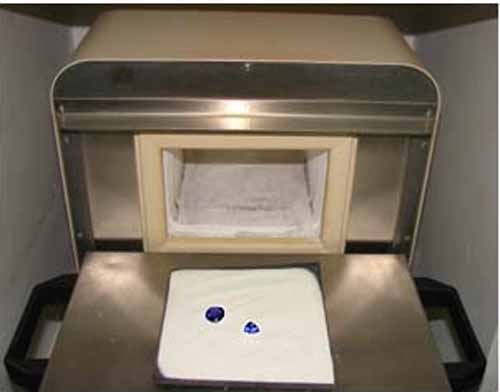 Heat can lighten, darken, deepen or change a gemstone’s color entirely. It can eliminate inclusions or it can form them. It all depends on a number of factors including pressure, temperature, rate of heating and cooling and chemistry.

Heat usually affects a material’s color by altering the chemical state of some of its atoms and thus its light absorbing pattern, but it can also change appearance in other ways.

Some of the more commonly heated gemstones and the impact of heat upon them are:

Amber : Gentle heating oxidizes and darkens Amber. Some Amber also contains gas bubbles that can make it appear cloudy. The bubbles can be removed by slow heating, generally whilst immersed in rape or linseed oil. Additionally, heat can be used to produce tiny fractures called sun spangles” in the trade. This is done by heating bubbles within amber to a point where they implode making discoid fractures which reflect light causing a “spangled” effect.

Beryl : The blue-green variety of Beryl - Aquamarine is a routinely heated gemstone. Color in Aquamarine is caused by iron impurities and it generally has 2 colors – yellow and blue. The 2 colors together make green which is why most unheated aquamarine is a greenish blue color.  Heating to approximately 400 degrees centigrade will remove the yellow, leaving just the blue. The change is caused by an alteration in atomic structure, namely F3 molecules becoming F2 molecules.

Corundum : Heating of corundum, notably Ruby and Sapphire varieties is a widespread and common occurrence.  Unlike Beryl it is not usually done to enhance color as such, but transparency, and it is not an atomic change but a structural one. Heat causes structural changes in “silk” inclusions in ruby and sapphire. The rutile which forms the silk dissolves into the stone at high temperature (usually around 1800 degrees centigrade). Leaving a more transparent and therefore more beautiful gemstone. A large percentage of ruby and sapphire on the market today is heated and it is a fairly routine treatment. Unheated rubies and sapphires will contain microscopic rutile needles or tiny gas bubbles in pockets of liquid which are evidence that laboratories can use to guarantee that these stones have not been heated. If these gems are the finest color they will command premium prices due to their extreme rarity.

Tanzanite: Tanzanite is an interesting case as the blues we know and love would not exist without heating.  It is assumed that all Tanzanite is heat treated. Tanzanite before heating resembles treacle in color.  It is a strongly trichroic gemstone with 3 colors -  reddish-violet, blue, and yellow-green all combining to produce a brown treacle-like hue. The yellow-green component is removed with heating at 600 degrees centigrade, resulting in the blue or purple final color. The treatment in permanent and stable. 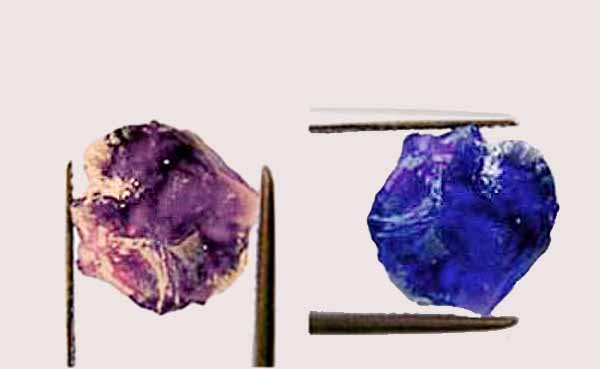 Tanzanite Rough. Before and after heating. Displays the effect heating has on Tanzanite's color.

Heating is not a color enhancer in Tanzanite’s case. As with all gemstones. the deeper the color saturation the finer the stone. So the more "washed-out" or pale the color in Tanzanite the lesser the grade. The color saturation is present even in its rough unheated form - a deep molasses like color will heat to a deep blue or blue violet. A pale brown will heat to a pale blue. Hence the heating process does not improve the color in Tanzanite, it simply changes it from brown to blue. The color quality is dictated by nature.

Heating can be carried out in a wide range of methods and with even wider variety of equipment. In Thailand and Africa for example, stones are routinely heated in oil drums in the case of corundum or even in foil and plaster of paris over a gas burner or in test tubes in the case of Tanzanite! More advanced gem dealers use sophisticated Gem Ovens which control the rate and temperature of heating to a high degree.

Irradiation is the process of using electromagnetic radiation to alter a gem’s color. Irradiation has been with us since the early 1900’s when scientists like Bordas and Crookes used radium salts to change blue sapphires and diamonds green.

In today’s world, irradiation is routinely used to color a number of gemstones. Most notably, Diamonds, Beryl, Pearls, Topaz, Yellow Sapphire, Amethyst and Tourmaline. The process by which irradiation changes color is fairly straightforward. Radiation causes electrons to be knocked off some atoms, leaving them free to be absorbed by others. This has the effect of creating “color centers” which in turn alter the light-absorbing pattern of the gemstone and by extension its color.

Generally it is gamma rays from radioactive elements such as cobalt which labs use to irradiate gemstones. Gamma rays leave no residual radioactivity. Radium by contrast, does and is hence dangerous to human health. Radium irradiated gemstones are very rarely seen these days and are usually throwbacks from early experiments. With Gamma Irradiation, the gemstones are usually put into a lead container with radioactive material such as cobalt or cesium, and left there until the color change is achieved.

So what effect does irradiation have on different gemstones? Irradiation of blue topaz has created shades not found in natural blue topaz, like London and Sky Blue.  Tourmaline can be irradiated to darken pink stones into red ones; these are indistinguishable from natural red ones. Off-color diamonds (browns and brown-yellows) can be irradiated and heated turning them into intense yellows, greens, blues, pinks and browns. Irradiated diamonds are valued far less than their natural counterparts of comparable color, clarity grade, and size. Irradiating cultured pearls results in blue or grey overtones.