As most people who own gemstones have discovered, gems can look very different in different lights and even times of day. This article explores how color, light and gemstones interact and explains this phenomenon.

As most people who own gemstones have discovered, gems can look very different in different lights and even times of day. This article explores how color, light and gemstones interact and explains this phenomenon.
Color is king in colored gemstones. It is by far, the most influential value factor of the 4 C’s and as such, is clearly a vital component of a gemstone’s quality. Understanding color and how we see it, is thus an important part of understanding gemstones.
The light in which a gemstone is viewed is strongly influential to the color your eyes interpret. To understand why this is, an understanding of some of the basics behind light spectrums and what actually causes the human eye to perceive colors is required. Once this is understood, many questions will be answered as to why some gemstones look so different in contrasting lights.

What is Light Exactly?
So what exactly is light? It is a small section of wavelengths in the electromagnetic spectrum. These particular wavelengths, when they strike sensors in the human eye, are interpreted as color. Light is perceived as many colors depending on the wavelength being viewed. The light we can see is only a tiny part of a huge spectrum of electromagnetic (EM) energy. The spectrum also includes visible radiations such as radio waves, microwaves and x-rays.

A prism illustrates how white light spreads out in the hue sequence
of the visible spectrum
The apparent whiteness of the light we see coming from the sun or an ordinary light bulb is produced by the whole range of visible radiation mixed together. When a narrow beam of this light passes through a prism, its various waves spread out in a definite sequence. In the resulting band of light the shortest waves at one end produce a violet sensation, followed by ever longer waves we sense as areas of blue, green, yellow, orange and red. The exact sensation we get when viewing a rainbow.
White light sources vary in how they distribute their energy across the different color/wavelength areas of the visible spectrum, thus we sense a warmer more yellowish white light from a standard incandescent bulb and a cooler more bluish white in many fluorescent tubes. This is because the incandescent bulb emits much more light in the long wavelengths than in the short ones, giving a yellowish light whilst fluorescent tubes emit weakly in the red end with strong emissions in the greens and blues. Sunlight by contrast, supplies its own version of white light as its radiation is distributed around a broad peak in the blue-greens, tapering off on either side.
What is Color?
The enduring question “if a tree falls in the forest is there a sound if there is nobody there to hear it?” applies in a similar way to color. An appropriate question might be “if a tanzanite sits in a safe away from human eyes does it have a color?” The arguable answer to both questions on a scientific level, is no. We are used to thinking of color as an inherent property in an object like its shape or size but unlike atomic bits of matter that ultimately add up to an object’s mass or weight, color has no independent reality. It is an interpretation of our own senses and exists as a perception in the viewer, not the object’s atoms. Color comes through our sensory equipment –the eyes and brain. So when we describe a gemstone’s color, we are actually describing sensations arising from complex physiological processes.
What we see as color are actually simply the wavelengths we call visible light reflected back at our eye, the rest of the colors are absorbed. Hence the color of a gemstone does not emanate by itself, from within the gemstone. Color comes from light and the interaction of light energy with trace elements within the gemstone. Like light split by a prism, various wavelengths are seen as different colors.
So let’s consider this in context. A Tsavorite absorbs long visible wavelengths more than short ones. When sunlight hits the Tsavorite, the unabsorbed light it can return to our eyes is high in short wavelengths - greens and blues and weak in longer waves (reds, oranges, yellows) as these are absorbed. Our vision processes the shorter waves into a green sensation. 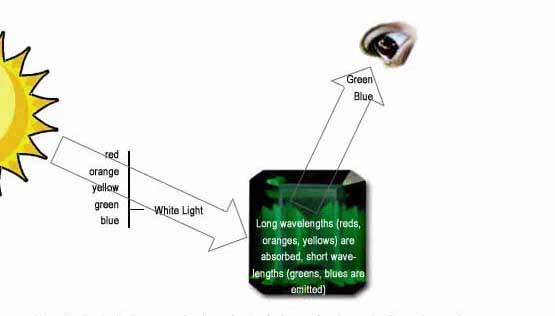 In Context: Tsavorite absorbs the longer wavelengths and emits shorter wavelengths
causing the eye to perceive green
The opposite would be true of a red stone, say a ruby. This absorbs short visible wavelengths more than long ones, hence when sunlight hits a ruby, the unabsorbed light returning to the eye is rich in long wavelengths – lots of reds and oranges, but is weak in shorter waves, hence we see a red sensation. Conversely, if the same ruby is put under a green light (filtered light mostly from the mid spectrum), the ruby’s tendency to absorb shorter wavelengths plus the lack of long waves in the light source, causes the ruby to appear much more grayish and desaturated.

Gemology and Spectrums
One of the tools gemologists use to identify different types of gems is a spectroscope. This tool allows the gemologist to determine the spectra of a gemstone which shows which wavelengths are absorbed. It is a powerful identification test and serves to illustrate the above example. Below are the spectras from Ruby and Tsavorite with the lines showing which colors are absorbed.

Spectra as seen through a Spectrascope. Left hand image - Ruby spectra showing absorption lines
Right hand image : Tsavorite spectra
Summary
Light causes color and the absorbtion of different wavelengths of that light by different minerals cause our eyes to perceive different colors accordingly. This is why a ruby can appear incredibly red under a very incandescent light (with lots of long wavelengths) and very unimpressive under a greener light with shorter wavelengths. It is why a Tanzanite can appear very blue under fluorescent tubes and more violet with flashes of red under incandescent light. Even at different times of day, gemstones can alter their appearance as the quality of light changes as the day wears on.
On a scientific level, the light which is used to grade stones is an important consideration in order to maintain consistency and keep to standards but on an emotional level, the chameleon nature of gemstones in different lights can be regarded as yet another magical quality of these wonderful gifts nature has bestowed upon us and is something to be enjoyed.