Tanzanite mining has had a colorful history since Ali Juuyawaatu stumbled upon the blue gemstone in the late 1960’s.
In later years, conflict has developed between the traditional miners and large scale mining firm Tanzanite One. This article explores the reasons for this.

A Brief History of Tanzanite Mining
In the early years, during Tanzania’s dalliance with socialism, the Tanzanite mines were nationalized and run by a state corporation called STAMICO.  In 1990, following the demise of socialism in Tanzania, the Tanzanian Government demarcated the mining area; a narrow strip along the Merelani hills, approximately 5 km north of Mererani township, into four Blocks denoted A, B, C and D as shown below. 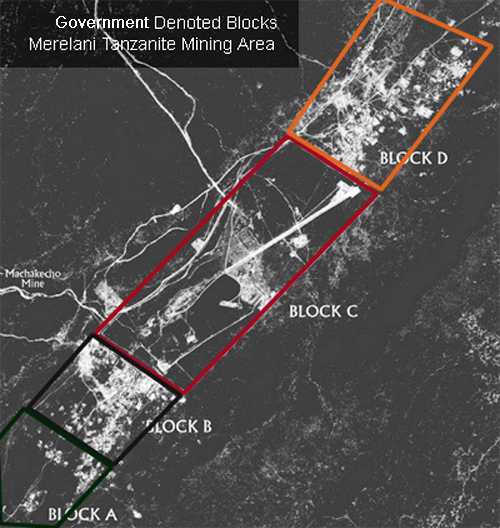 Block A was awarded to Kilimanjaro Mines Ltd, Blocks B and D to small-scale miners through the Arusha Regional Miners Association (AREMA)and Block C to a graphite miner called Graphtan Inc which subsequently went bust in 1996. Africa was at that stage, seeing an influx of South African companies entering local markets as apartheid ended in their own country and they looked further afield for opportunities.

Graphtan’s licence to Block C  was purchased by a South African company called AFGEM. Using the staff and the equipment of Graphtan, AFGEM started producing Tanzanite in 2001. In 2004 the Tanzanite One group acquired AFGEM’s Tanzanite business and assets.

The Genesis of Conflict
From 2004 to 2015 Tanzanite One group mined Block C constituted as an offshore company registered in Bermuda but listed on the London stock exchange. When South African registered AFGEM sold the mine to the Tanzanite One Group in 2004 the senior staff members were kept. Most of these were South African citizens, including all top management and even the site manager. This led to conflict between the small scale Tanzanian miners who had traditionally mined the area and the foreign newcomers who they perceived as exploiting their resources and repatriating profits with little direct benefit to the Merelani community.
This conflict escalated when Tanzanite One elected to follow the business model De Beers had used in the Diamond industry by appointing a series of “sightholders” mainly based in India where they exported their rough production to be cut.

They ostensibly envisaged using this model to control the supply to market with a view to forcing up prices. They established a well run and imaginative “pull marketing campaign” in major developed markets designed to create demand at the consumer level using their Tanzanite Foundation marketing arm. This campaign, centered around their “Mark of Rarity”, strongly implied that unless a Tanzanite was purchased from Tanzanite One and carried its “Mark of Rarity” certificate it was of suspect pedigree.

This further alienated the small scale miners who prior to Tanzanite One’s entrance to the mining area, had been the discoverers and traditional miners of Tanzanite.

Small Scale "Artisanal" Mining
The small-scale mining sector in Mererani is concentrated in Block B and Block
D. There are approximately 700 mines according to AREMA, each of them holding a
Primary Mining License. The PML license is only available for
Tanzanian nationals. Block B and D are heavy concentrated and the mines are located
very close to each other. Whilst all work with a PML, the equipment and technology
used varies from mine to mine. The most basic mines only have a lateral hole in the
ground that they operate with either a ladder or a rope, while some mines use more modern
mining technology.
Working in this sector is no bed of roses. Conditions are tough and working hours long. Most miners work as cooperative groups with a profit share – equal shares of Tanzanite discovered for each miner in the group,  but this also means equal shares of nothing when no Tanzanite is found, as frequently happens for months on end in some mining claims. Many miners carry second jobs in farming to alleviate this. This is becoming more prevalent as Tanzanite become scarcer and more difficult to find deep down at over 400 metres.

However, contrary to what some believe, small scale mining is the natural home of most colored gemstone mining (in Sri-Lanka, formerly Ceyon, mining of Sapphires is exclusively reserved by the government for small scale miners only, for direct benefit of the local community).

Whilst proponents of large scale mining will argue that small scale mining is inefficient and dangerous, it also ignores the fact that it has been the path out of poverty for many and a very “grassroots” industry open to anyone with the verve to make it work, much as the original Kimberly Diamond deposits were. There are many great success stories and demonizing the sector is to ignore this fact.

As such, we will leave the final word on this subject to world renowned Gemologists and Explorers Richard Hughes and Vincent Pardieu :

"We ask you this: Which is more sad — the conditions under which the world's poor eke out an existence, or the self-righteousness of those who have no direct experience with the problem, but profess an understanding of the solution. Just who is lacking enlightenment? Next time you set eyes on a tanzanite, a jade, a ruby, a diamond, or — dare we say it — a cell phone, understand where it comes from. It is not just of the earth, but also from the blood and sweat of thousands of fellow humans, each in their own way struggling forward in life, trying to make things a little bit better for themselves and their families. Wanna make a difference in their lives? Buy what they are risking their lives to produce. Now how's that for activism? How's that for revolution?"

The Final Word
As with all arguments and conflicts, both sides feel justified in their convictions but the truth probably lies somewhere in between. AREMA’s resistance to Tanzanite One has its roots in Tanzania’s “ujamaa” (literally “family-hood or togetherness”) philosophy nurtured by Tanzania’s first president Julius Nyerere, which abhors any threat to the community or collectivism. This is largely responsible for AREMA’s inability to work with Tanzanite One rather than against it and there is clearly some room for improvement here.
Contrastingly, there is no doubt Tanzanite One brought increased professionalism and working standards to Tanzanite mining and their CSR campaign was certainly of benefit to the local community. However, their alienation of that community and their exclusionist approach coupled with the perception (rightly or wrongly) that an exclusively Tanzanian resource was being exploited by a foreign company registered in a murky offshore jurisdiction, led to conflict and distrust in the sector.

So the final word on whether a large scale producer repatriating profits or small scale Tanzanian producers are more "ethical" is really a moot point. The answer is neither. Both contribute to Tanzania's social fabric and both are important.

Everything you need to know about Tanzanite. Learn all about this beautiful, rare gemstone. Learn about its properties, how to judge quality, pricing, how it is mined, where it comes from and how to spot imitations.