Some spectacular Yellow Sapphire is being mined in the remote Garbatula region of Kenya. The crystals a re surprisingly high clarity and require no heating or any other treatment. Our Founder Basil Zagoritis was first to mine this wonderful stone.

The Garbatula Sapphire mines in Northern Kenya were actually opened up by our company in the early 1970’s. The company was just starting out on its first mining project and samples of dark blue sapphire from the area had been brought in by local tribesman from the area and looked promising. We obtained the mining claim for the area from the Mines Ministry and Basil Zagoritis, the company founder began the herculean task of  building a road to access the area and setting up a mining camp. The area was dusty, wild and remote, located about 80 miles northeast of Mount Kenya.

Our Sapphire Mine in Garbatula, Kenya in the 1970's

The blue Sapphire which was mined bore a close resemblance to the Australian Sapphires from Queensland and had a strong secondary green axis which tended to make the stones quite dark in tone.

Initially, the focus was on mining blue Sapphire which predominated closer to the surface but as the company mined deeper, an exciting development occurred – the deposit began yielding up crystals which contained both yellow and blue colors, with some of the yellows being a unique “canary yellow” not usually associated with yellow sapphire.

Bi-color Sapphire crystals from the Garbatula Mine being viewed in our offices.

These crystals had the added bonus of being naturally clean and free of inclusions. The color however, was the real focus of interest; it was a unique, sharp yellow, vastly different from the more orangish-yellow color of the yellow sapphires mined in the far east.  When cut, the color closely resembled that seen in the finest canary Diamonds. It required no heating or enhancement to improve it – in short, it was natural.

In the world of Sapphires today, it is unusual for a deposit to produce consistently high clarity, fine color stones which require no enhancement. This is the crux of why Kenyan yellows are so special. The vast majority of the sapphires in the market today have undergone some modicum of treatment; at the very least, heating.

There are a variety of treatments and enhancements used to improve the appearance of Sapphires.

The most common and widely used method is heating, which is also the oldest method. In fact, most Sapphires seen in the market today have undergone this process of thermal enhancement in a furnace. The objective of heating a Sapphire is to improve its color, clarity and to eradicate color zoning. High temperatures are required to achieve this, traditionally around 4000 degrees centigrade. This dissolves silk inside opaque Sapphires, rendering them transparent. It also removes any element of color zoning in a stone, giving a more uniform color. 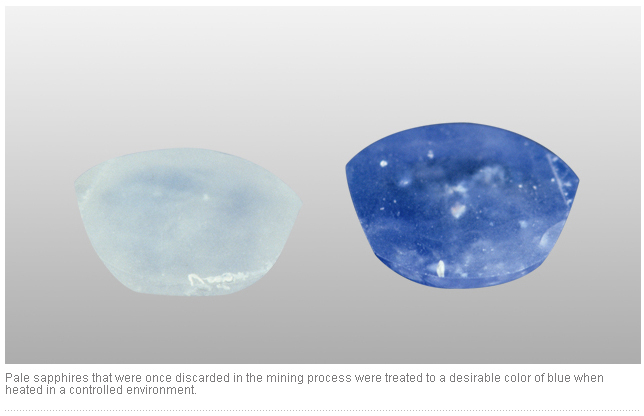 Due to the high prevalence of heated Sapphires in the market today, many consumers have learned to accept heat-treated stones, even without disclosure. Collectors, investors and connoisseurs however, covet and seek out the rare pieces that boast fine color and clarity naturally.

This is one of the more insidious of treatments, especially when not disclosed, as is often the case in the market today. It is quite an advanced process where poor quality sapphires are heated to extreme temperatures – in fact very close to their melting point. Within the crucible in which they are heated, certain color-inducing elements are included. Titanium was one of the early elements used to color blue Sapphires for example. At these extreme temperatures, the molecular structure of the sapphire “loosens” and the secondary element, the titanium diffuses into the Sapphire thereby improving its color. Titanium diffusion processes typically only diffused a little way into the stone, hence creating more of a surface layer of color. If the stone was ever repolished or chipped, the actual color beneath was revealed.

Latterly, a more effective diffusion process was developed using Beryllium. As the atomic structure of Beryllium is smaller that Titanium it more thoroughly penetrates the stone, thereby creating a much deeper penetration of color which were hard to detect back in the late 1990’s when the process was first developed. The deeper color penetration was successful in producing sapphires, particularly yellow and orange sapphires of unnaturally vivid hues.

Poor Quality Yellow Sapphire rough before and after Beryllium treatment

Sapphires that have been subjected to this process have very little value on the market and are considered to be the “poor stepchild” of naturals. Unfortunately some unscrupulous dealers still sell these highly treated stones as naturals.

Some poor quality yellow sapphire which has a grayish cast, undergoes irradiation in a controlled environment. This has the effect of altering its grayish color to a more attractive golden hue. This is not a stable or lasting treatment however and these stones will lose their intense color over time, particularly if subjected to bright light or heat. As a result, they have very little value.

When you understand the lengths to which dealers will go to enhance yellow sapphires and the extent to which these practices are prevalent in the market today, you can begin to appreciate the rarity and beauty of purely natural stones.

This is the special thing about the wonderful Yellow Sapphire from the Garbatula deposit – we simply cut it, nothing more. It boasts the most beautiful, sharp yellow hue which is reminiscent of canary diamond and is for the most part, very clean. befitting that such an exceptional gemstone should have such a dramatic story behind it…