Aquamarine – The Birthstone for March

Aquamarine, reminiscent of the of the sea and believed to be a powerfully soothing influence on relationships, hence why it is considered to be such a perfect gift and one of the world's favorites

As you would expect from a gemstone whose name means sea water, Aquamarine is reminiscent of the crystal blue waters of the Mediterranean Sea.  Conjuring up glorious thoughts of happy, warm, sunny, evenings by the edge of the sea and memorable times.
The gemstone that is said to be a powerfully soothing influence on relationships and ensuring a long and happy marriage. Hence, why it considered such a perfect gift on a special occasions and to celebrate the 19th wedding anniversary.
A very wearable light blue gemstone, that can transition easily from day to evening and can take a few knocks without chipping or scratching (see the Moh’s scale of hardness).  They can be set into all forms of jewelry and look stunning combined with Diamonds and an array of other colored gemstones.
HOW DOES AQUAMARINE FORM?
Aquamarine is from the Latin: aqua marina, “sea water”, and is a blue variety of Beryl.  A gorgeous light blue gemstone that has captured our hearts and desires for centuries. They are known for forming in spectacular hexagonal crystals/pencils in the host rock 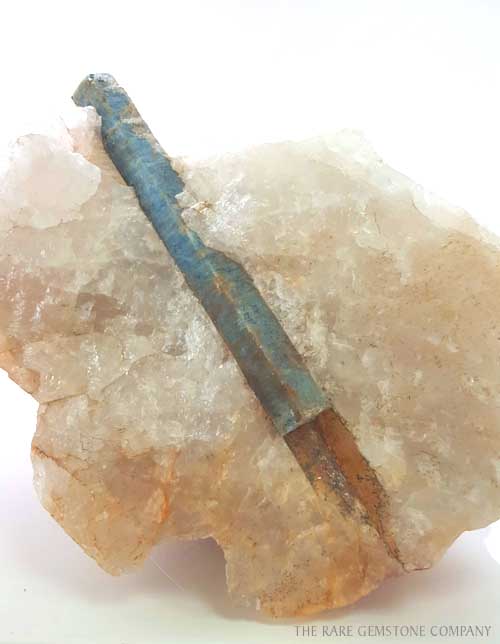 Aquamarine crystal specimen from the Rare Gemstone Company's Aquamarine mine, Meru, Kenya. Mined 1984
Did you know that both Emerald and Morganite are also forms of Beryl?  They are all minerals composed of beryllium aluminium cyclosilicate, they change color according to what other minerals they come in contact with as they form. Emeralds for example, are colored by trace amounts of chromium and sometimes vanadium. Aquamarine is colored by iron.

AQUAMARINE QUALITY? … What should I look out for?

Aquamarine Color - The best Aquamarines are a stunning very slightly greenish blue color with a moderately strong color saturation/intensity.  Some Aquamarine is naturally a more yellow/green color, this green hue can sometimes be removed by heating the gemstone. This is a routine treatment for some Aquamarine to remove the greener hues and to bring out or enhance the blue hues. You will often see in the market ‘heat treated (routine)’ and this perfectly accepted in the gem trade. However, a fine, natural, untreated Aquamarine will command a higher value.

Aquamarine can be mistaken for Blue Topaz as the color can be quite similar, though Topaz does tend to have a more ‘neon’ edge to it as it is often irradiated to enhance its color.

The color difference between Topaz and Aquamarine
Aquamarine Clarity - Unlike Emerald which is usually heavily included or flawed, making them look ‘sleepy’, Aquamarine is commonly more ‘clean’ by comparison and therefore has higher clarity. As with all gemstones, the best stones are those that have the best/top color and saturation combined with the highest clarity. 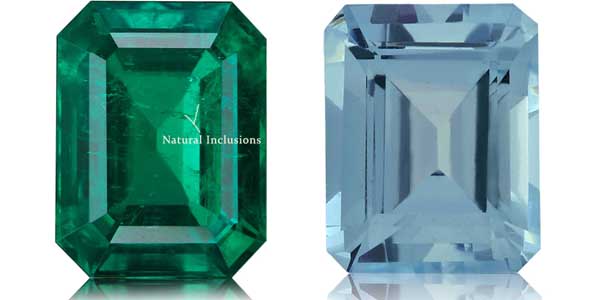 Aquamarine is a very popular gemstone and widely accessible.  It is very affordable in lighter colors but the more cleaner, deeper colors command higher prices.

° The Romans called Aquamarine "water of the sea". They used it as protection over the water as they believed it guarantee safety whist travelling by sea. They also believed it to aid in digestion and fluid retention because of its purification properties, and made drinking goblets out of it to purify the liquid in it before it was consumed.

° In ancient lore, Aquamarine was believed to be ‘the treasure of Mermaids’ possessing the power to guard and protect sailors at sea and to counteract the forces of darkness and procure favor from the spirits of light.

° In Medieval times, the stone was thought to reawaken the love of married couples and in folklore to render soldiers invincible and bring victory in battles and legal disputes

° Aquamarine, the soothing gemstone - assisting in the release of anger and used as an aid in the reduction of stress. It is said to help one make positive changes in one’s life, as well as granting courage to go on.

° It is believed to be the strongest gemstone for clearing and activating the Throat Chakra by stimulating energy from the heart to the throat, allowing one's deepest and heartfelt truth to be communicated.

° Aquamarine is said to be an excellent crystal for meditation, as it quiets the mind and aids in the awakening of paranormal abilities and inducing revelations.

° Some traditions claim it is possible to see your guardian angel through an Aquamarine crystal when it points to the north.

° Aquamarine, is still to this day, believed to aid in fluid retention and will help deal with glandular disorders, as well as aiding in maintaining the health of your eyes.

° Aquamarine is believed to have a powerfully soothing influence on relationships, particularly on married couples and ensuring a long and happy marriage. Hence, why it considered such a perfect gift on a special occasions.

Create your own unique piece of jewelry, choose an Aquamarine and have it set in a custom designed, handmade piece and start your gem story.
#yourgemyourstory