Learn about Tanzanite imitations that you may encounter in the market. Whereas Tanzanite has never been synthesized, it has a number of imitations which can fool you. Learn what to look out for and how to spot the fakes.

One question we are often asked on our “Ask a Gemologist” forum is how to tell if a Tanzanite is real and if there are fakes out there that buyers should be aware of. This is a very pertinent question, particularly in this age of gemstone treatments. Fortunately, Tanzanite has not been targeted the way stones like Sapphires have for extensive undisclosed treatments.

Ways in which Sapphires can be extensively chemically and physically altered to improve their appearance have been around for decades now and more methods are always being developed, particularly in Thailand, where a great deal of the rough is cut. Fortunately Tanzanite is not in the same position. However, there are factors to be aware of.

Firstly, whilst Tanzanite has never been successfully synthesized (a synthetic is a lab created, manmade version of the natural which has the same chemical and physical properties as a natural), a synthetic Forsterite has been produced in the last decade in Russia which produces an imitation which closely resembles Tanzanite, although only the lower/medium grades of Tanzanite. Some unscrupulous sellers have sold it as Tanzanite in the past.

As a gemologist, it is easy to identify this imposter using several tests, chiefly the refractometer. Synthetic Forsterite has a refractive index of 1.63- 1.67 which natural Tanzanite is 1.685-1.707.

Similarly, a useful tool called a Hanneman Filter easily separates out the Forsterite as it shows up green in the filter as opposed to the orange-pink natural Tanzanite will show. However, as a layman without gemological tools at your disposal, there is a property of the synthetic that makes it identifiable using a simple loupe. Synthetic Forsterite has a very high birefringence. Without getting too technical, this means that the stone can exhibit “doubling”.

As a layman you can spot this by looking closely at the back facets with a loupe which can be purchased online very inexpensively. Look through the crown facets from an angle and focus on the pavilion facets. They may appear as if they are doubled up. This is a clear sign of a synthetic forsterite as natural Tanzanite does not have a high birefringence and as such will not display this effect.

Tanzanite does have a number of other imitations. The most common are Cubic Zirconia (CZ), Synthetic Spinel, Ytrium Aluminum Garnet (YAG) and even colored glass. 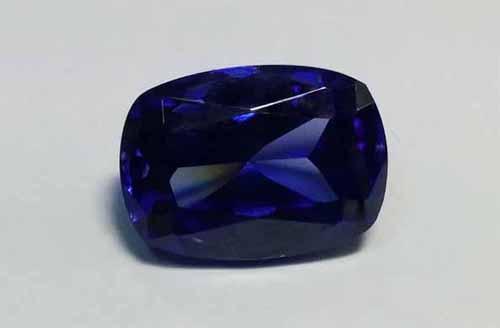 These are actually very easy to spot as they are all singly refractive whereas Tanzanite is doubly refractive. What this means for the layman, is that they can be separated from real Tanzanite using a simple hand held tool call a dichroscope. These can be purchased online inexpensively. 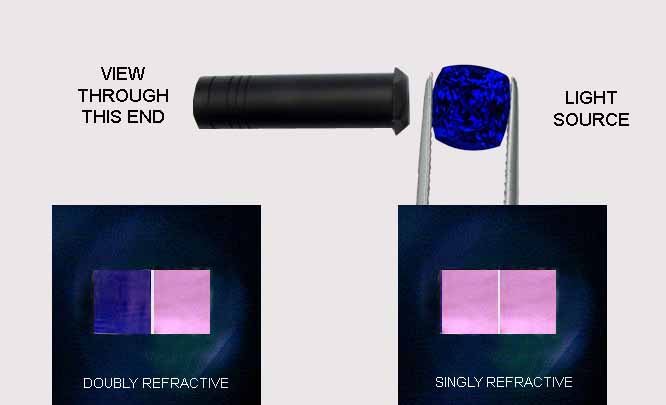 By looking at the gemstone through the dichroscope you will see 2 windows. If both windows display the same color, then the stone is singly refractive. If each window has a different color, then it is doubly refractive.

The other factor to be aware of in Tanzanite is the more recent attempt by unscrupulous sellers to coat lower grade Tanzanite with a light coating of cobalt, which tends to improve the look of the color. Whilst this practice is not widely used, it is important to be aware of it. This article in our Article Center looks at this in more detail.

Buying Tanzanite should be an exciting exercise, as you are purchasing something beautiful and rare. However, it is important to be informed of the pitfalls out there and to be able to sidestep them as an informed buyer.